Dubs 2 the new University of Washington Mascot.  He is a rock star and every one that meets him falls in love.

Big thanks to Davina and Brent for giving him an awesome home and Anne-Lisa for doing a fantastic job as his trainer. 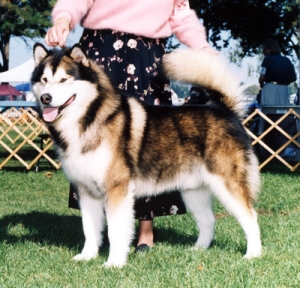 He hasn’t really been taken away. He has only gone with the Angels to play. He has been given wings with which to fly. All this troubles have passed him by. His life in heaven now must start, but we’ll hold his memory in our hearts

Apache was the best first show dog. He finished his championship at 18 months of age with a Grand Sweeps, Grand Sweeps Best Opposite, Multi Group placing and was a AMCA Top 20 Participant in 1999. 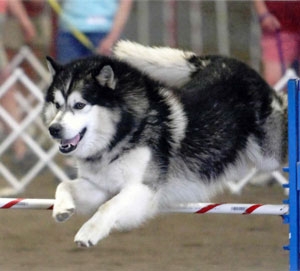 Bart has found a new adventure – AGILITY! He has been having a lot of fun entertaining the crowd and other exhibitors. He has finished his Novice Jumpers title and has one leg toward an Open Jumpers title. The challenge for Bart has been to not get so excited and get the zoomies big time.

Bart finished his Championship in April of 2009. Bart is glad to be done with this part of his career, so he can focus on agility, hiking, and sledding. 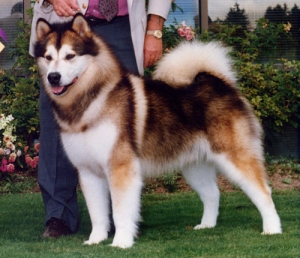 Casey was by BISS Ch. Targhee’s Kodiak, ROM and out of Ch. Williwaw’s Ivaloo of Targhee, ROM

Casey has 6 Best in Shows, an American and a Canadian National Specialty win. He has 11 Specialty Breed wins. Casey touched the heart of those he met. He was a fun loving dog and, as Mary Jane and Al Holabach put it, “Casey was our clown”. 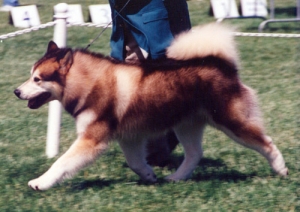